This weekend we released a new version of PractiTest with one feature in particular that has been requested by a number of customers – the public release of our Automation XBot Plugin.

Using the XBot, you can run automated tests and scripts created with virtually any tool (Selenium, Watir, QTP, etc) or any homegrown testing framework. You can learn more about the XBot from our Automated Tests documentation, and if you want to take part in this Public Beta just send us an email and we will activate this feature in your projects. 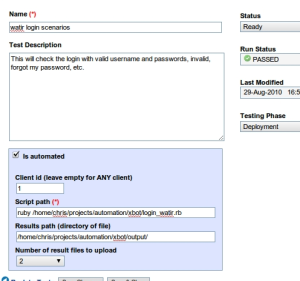 This version comes with a number of small additions in the Report Center, such as the ability to export your reports to PDF format as well as to work with Views on Requirement Reports.

The current release also fixes a number of smaller issues that were reported by some of you in the last couple of weeks.

We’ll be happy to get your feedback on these or any of the rest of PractiTest, you mail us directly or use our User Feedback Forum.

With this new year we are releasing a new version that brings some of the functional features requested by many of you lately:

As always, we invite you to share any comments or feedback with us, both via our support hot-line or our user feedback site.

Last but not least we wanted to wish you a Joyful, Successful and most importantly Happy New Year!

PractiTest at the IGT Cloud Summit

Last week we participated in the IGT Cloud Summit that took place in Exodia, Tel Aviv. It was pretty fun and we’ve got some pictures to share. We also met some interesting companies who presented their ideas and product.

Our logo (part of the 20 ‘cloud’ companies that were presenting that day):

Joel also gave a short presentation, explaining about the real need for PractiTest that came from, yes, our users: 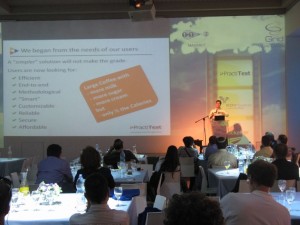