This weekend we released a new update to PractiTest.

As always it came with many small fixes and improvements, but it also included 2 major improvements that were high in our users’ wish list:

Even though it is still in Beta, we’re very happy launch the Reports module in this version.
What you see today is only a subset of the reports we’ll be having in the future, but we believe it already provides some great value.

The heart of the module, the Report Center, is where you create your reports and where you can see all the previous reports generated for your project:

In this first release you can create reports based on 3 templates: Tabular, Traceability and Detailed report; and you can use these templates for each of the PractiTest entities (Issues, Tests and Requirements).

This is how the new reports definition window looks like:

We will be happy to get your feedback as well as ideas for the additional features you like to see within this module. Please provide share with us your comments on our Feedback Forum.

There are some features in the system that we know people use all the time, for example the batch edit and batch clone features within the Tests Module.

Still, until today, this feature had a small problem, there was no easy way to set a field to empty once it was already filled with data. So on 95% of the cases this was enough, but we decided to go the extra mile and make this feature right 100% of the time.

We updated the edit/clone form in a way that let’s you decide what fields you want to modify by first selecting the checkbox next to the field name (if you want to leave this field “as is” just leave it unchecked). If you want to set a field to “empty”, simply select to modify and choose the empty option (of the drop down, or un-select the checkbox for example). 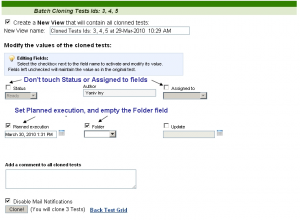 We are already busy working on the next batch of features to be updated shortly.
So see you in our next update with more cool features!

On July 2009, we got reviewed by IsraelTest blog. Since the review is in Hebrew we decided to translate it to English and share it with all of you: IsraelTest_Product_review.pdf

During the few weeks we concentrated a lot in our back-end server infrastructure, resulting in today’s upgrade with few functional additions, but bug fixes and back-end related stuff.

These are the two small features that we did add to this release:

Our latest updated comes to answer some of the “small-feature” requests we’ve been getting from the field these last number of weeks. We decided to make it a small one, so that it would allow us to continue developing the cool new functionality that will be available shortly (teaser – it rhymes with passports…)

This update comes with the following additions: 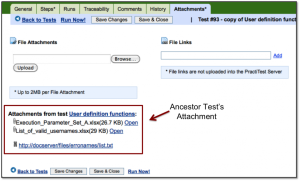 See you all real soon with a new update!

We started the New Year full of energy, and we continue working hard to implement the important things our users ask for.

So, even though last week we delivered a set of cool testing features, we decided not to wait any longer and release a new PractiTest version this weekend with some additional things that were ready to be released (we don’t believe in letting our users wait needlessly)

In addition to stuff above, we also did some cosmetic changes to the GUI of PractiTest to re-organize the screen and provide more working space on the screen (something that is always on high-demand). As part of this changes we took out the settings tab and placed it as a link on the top right of the screen, just in case you were wondering where that tab had gone…

We invite you to continue sharing with us your feature requests and wishes. The best way to do this is by going to PractiTest’s Users Forum and adding or voting for the things you’d like to see in the Platform.

With this new year we are releasing a new version that brings some of the functional features requested by many of you lately:

As always, we invite you to share any comments or feedback with us, both via our support hot-line or our user feedback site.

Last but not least we wanted to wish you a Joyful, Successful and most importantly Happy New Year!

This weekend (November 6th) we performed an additional update to PractiTest incorporating some useful and important features into the system.

Some of the most important additions are:

Many of the features above came from the feedback provided by our users in PractiTest’s Feedback Forum. We encourage you all to keep telling us what you want and need, and we will do our best to fill out your wishes…

We know of a number of reasons people like using PractiTest.
For example the idea of running tests and reporting issues automatically when a step fails, without needing to manually add all the steps to reproduce the bug.
The fact that all the testware (Requirements, Tests & Issues) is located in the same system.
The easy of use and simplicity of the User Interface.
And these are only a few…

Still we also see companies who are interested in using PractiTest as their Test Management Tool, but don’t want (or can’t) move their whole R&D team to work with PractiTest as their single Issue tracking system. After receiving a number of requests from companies like these, that are also using Jira, we developed an Integration between Jira and PractiTest.

One of the main difference in our approach is that, unlike many of the other tools integrating with Jira with a 1-side only integration (where bugs submitted in their tool are only copied to Jira and then the link is cut), we implemented a 2-way synchronization that allows our users to still take advantage of our Bug Management as well as our Test Management functionality:

The integrations requires some configuration and mapping (for the fields and their values in both tools) before it starts, but this configuration makes it very flexible and a lot more intelligent than simply copying the default system fields as they are. 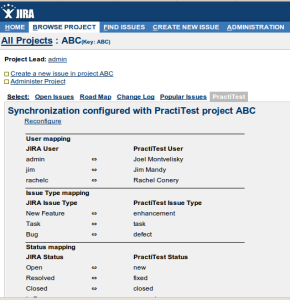 The bottom line is that it took us more time than we originally thought it would take to develop this integration, but we think we are on to something good. So I’d like to thank all the users who keep working with us on this project and giving us feedback on the plugin, and to our R&D guys for developing it around the clock.

Today we posted a new version of PractiTest’s product help.

This new version includes most of the changes and improvements we did mainly to the Settings module. There is also a Getting Started section with explanations on how to perform some of PractiTest most common operations.