Test Sets let you organize your tests in the same way that you organize your work into cycles or tasks.
A Test Set is a group of tests that belong to specific tasks or feature, or have some other reason to be run together.
Good candidates for Test Sets can be, for example:


Test Sets are organized in PractiTest using Filters, in the same way that you organize other entities (e.g., Issues).

In order to add a Test Instance, press the Add Test Instance button on the left side of your Test Set window. This will display the list of Filters and Tests in the Test Library. Simply choose the tests you want to add to your Test Set using the check-boxes, then click “add selected tests”.

In addition, you can create a new test directly from a Test Set by pressing New Test. After you create the new test and press ‘Save Changes’, the new test will be automatically added to the Test Set as a Test Instance.

You can also add test instances to an existing Test Set or create a Test Set based on chosen tests directly from the Test Library. Read more about it here.

Please Note:
Test Sets are limited to have up to 2K test instances per set.
Users who are not project admins, will be able to add up to 100 instances at a time.

Many times you want to access information you defined as fields in your Test Library within the Test Instance grid (e.g. the Platforms for which the test is relevant, tested component, test level, etc). Or, you will like to see the information from Runs related to the instances (e.g. Build number of your last run). This is easily done in PractiTest.

Start by pressing the “Columns” button on the top of the Test Instance grid. In the window that pops up you will see a list of all available fields to display. Each field has a toggle next to it - Choose the fields you want to display or remove fields from the display by pressing the toggle. You can also change the order of the fields by dragging and dropping them in the columns window.

Notice that part of these fields are displayed as “Test:<Field-Name>”, or 'LastRun: Field-name'. These are the fields from the Test Library or from runs that you can display in the Test Instance grid.

Now you are ready to execute, or run, your test.
Each test-instance can be run multiple times. You can view the results of previous runs by clicking on an instance’s name in the grid. The status displayed on the Test Set grid will be the status of the last run of each instance.

Step Status bar
As part of the Test Instance grid you can find a bar that graphically displays the status of your steps within the last test run of each of you instances. Notice that when hovering your mouse over the bar it will also show you in numbers how many steps are in each status. 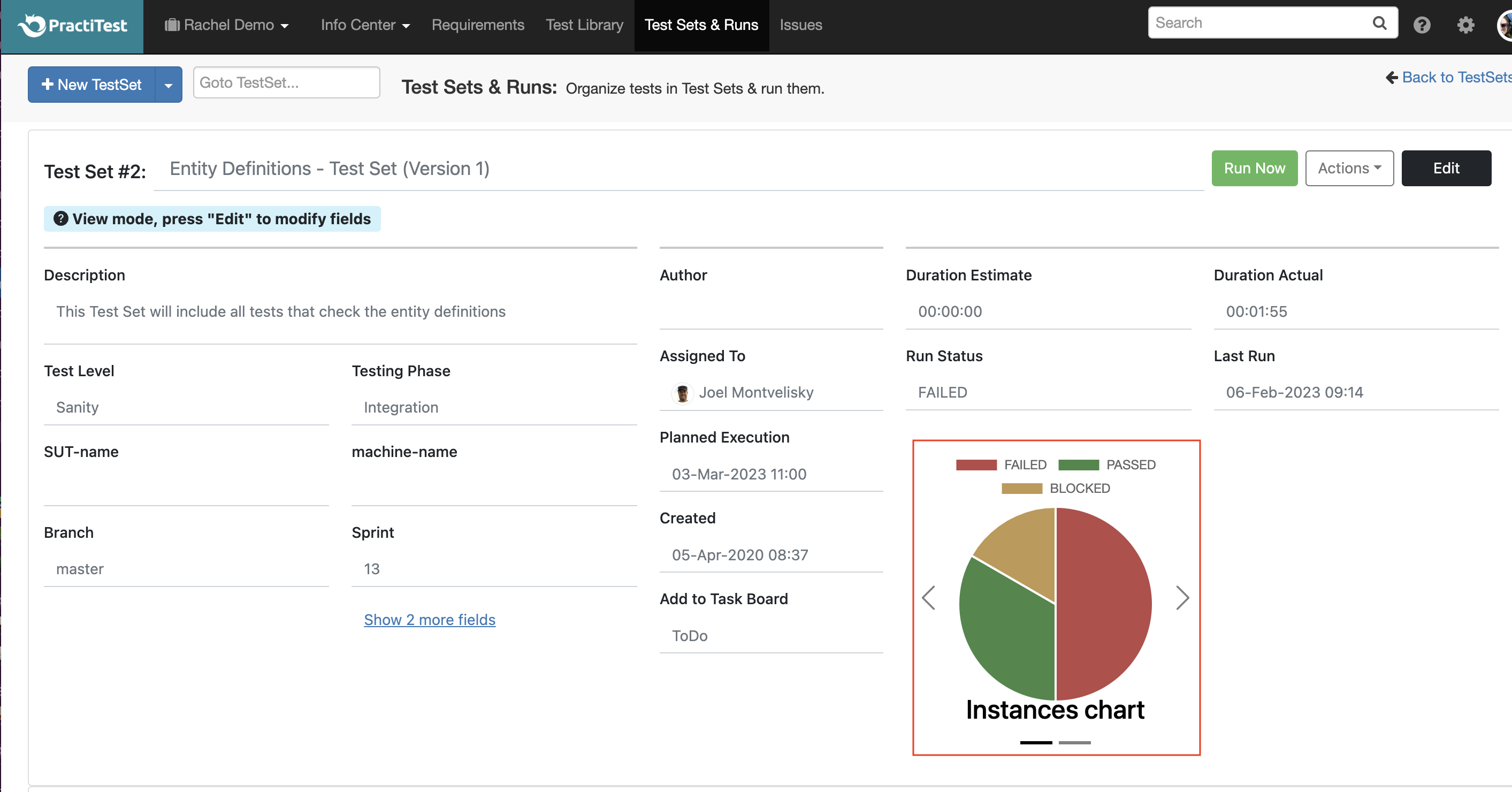 You can view this same information but in the Steps level (as an aggregation of all the steps in the test instances last run of your Test Set) by clicking the arrows next to the test pie chart.

You can also create Graphs for Steps Status as part of your PractiTest Dashboard. Step Status Pie Charts are available when you select to create dashboard graphs for Instances.

The Test Set contains test instances to be run, but is also an entity on its own. You can add comments and attachments to it using the Comments & Attachments tab (next to the Instances tab) or view its History in the History tab. 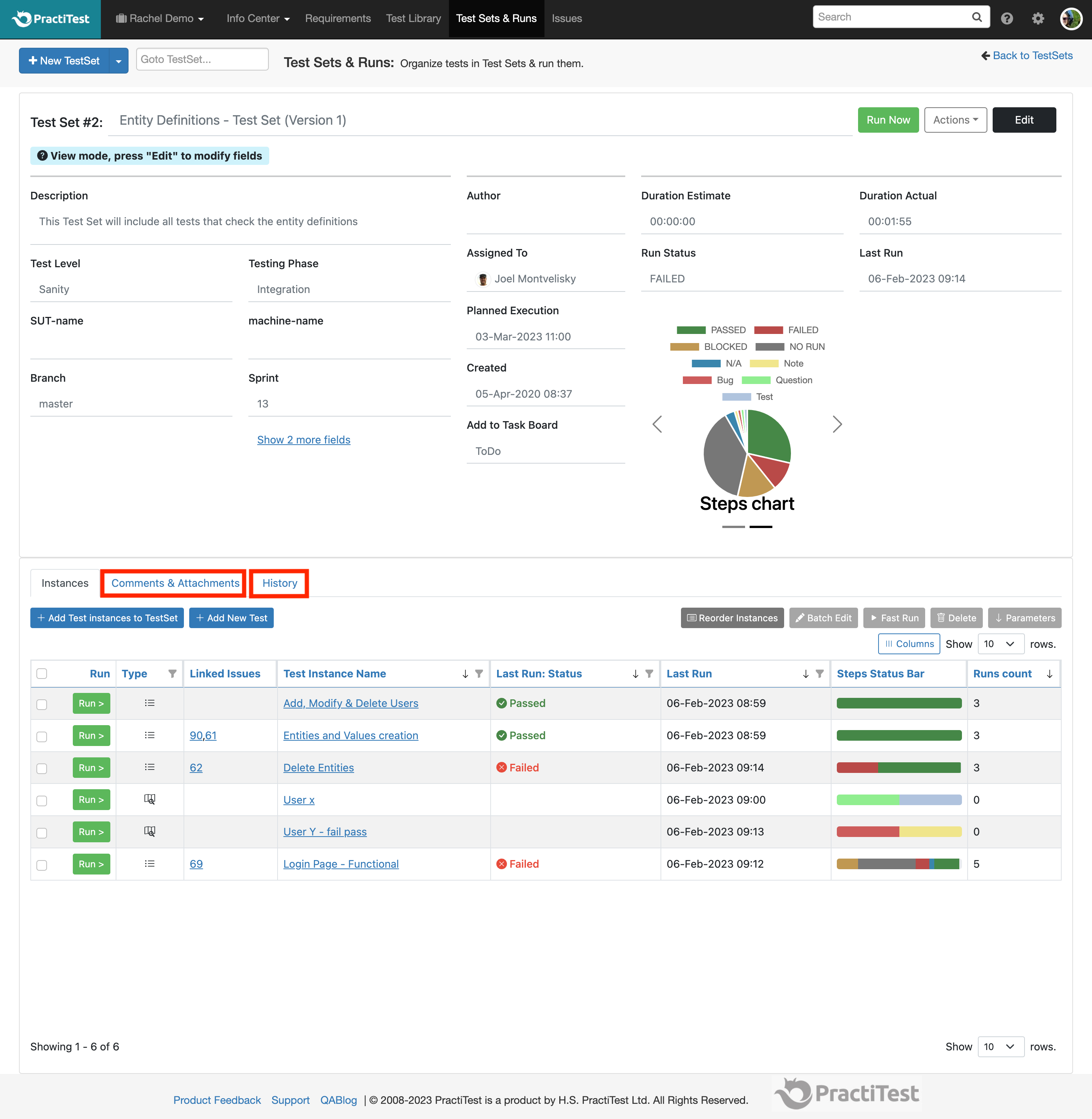